What's in Your Kitchen? 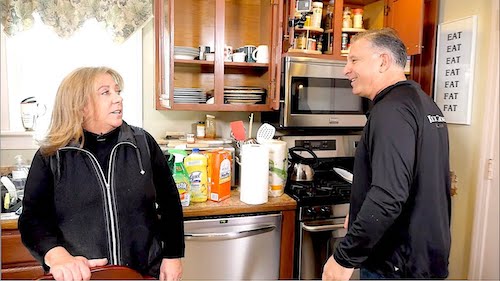 I was so excited to get my hands on my friend Joseph’s kitchen, I could barely contain myself. Everything about him is pristine. His clothes, his car and his entire home.  Well, almost the entire home.  For some reason he doesn’t pay a lot of attention to his kitchen, probably because he is constantly on the run selling real estate on Cape Cod. Plus, he has the most active social life of anyone I know. We’ve been friends for many, many years and we are constantly bickering like brother and sister which definitely makes for a hilarious (at least I think so) episode coming soon on the weheaveho youtube channel.  Be sure to subscribe!

I love ripping apart kitchens, so when Joseph called, I came running.  He has plans to tear out his old kitchen and install a brand new one in the next few months. My job was to go through everything in the cabinets and throw out all the old food and spices (that was a job within itself trust me). I needed to pull out all the dishes and endless glassware and coffee mugs (of which only 4 matched).  I had asked him to pick up bins for all the donation items and upon my arrival I found only one bin with a big hole in the bottom. Thanks Joe. That’s how our day began, and we just bickered from there on in.  Next thing I know, he says he has to leave for a showing (probably the name of his boat) and I didn’t see him for the next 3 hours.  At least I got him to eliminate half of the tourist mugs and gather up the 75 boxes of mixed tea boxes before he left. (I’m not making that up. There’s proof below in the pics). He even gave me permission to donate 4 of the 5 coffee makers which I was happy about as well.

Kitchen cabinets are the same as bedroom closets. I like to empty everything out and work from there. Empty, scrub and replace.

Before I begin, I’d like you to meet my client Joseph:

I tackled the right side of the room first by the stove.  You will see in the before pics an entire cabinet filled with spices stuck to carousels from 1985.  Weheaveho’d 75% of the old spices along with the carousels and replaced them with @target rubber lined stacking shelves.  Now the spices fit on one side of the cabinet which allows us to move all the bottles of olive oil etc to fill in the other side of the cabinet off from the kitchen counters.  Looks so much better!

In case you thought I was making it up or wondering where I stored the endless boxes of every type of tea known to man, here it all is.  FYI I’ve never seen Joseph drink tea in all the years that I’ve known him.

All of the mixed plates and bowls were in the donate bin with the hole in the bottom now, so Joseph pulled out all the new dishes he had boxed out in the garage for the new kitchen. The old glassware and mug cabinet became the new home for the new dishes.

All of the mugs and glassware found a new home as well in a smaller cabinet now that we were donating so many of the old ones.  Who needs 28 mugs anyway?

Making our way around to the other side of the kitchen, I started packing up the coffee makers, juice makers and the Keurig stand up rack that takes up so much space.  Who needs to see all those pods????  I replaced it with the pull-out drawer that hides under the actual Keurig machine and now he has even more counter space to work with.  I cleaned out and organized all of the boxes of food up above and I must admit, Joseph has zero junk food in his house. I think I found one bag of salsa chips and that’s it.  I was very impressed.

Last but not least I climbed up to no man’s land (top of the fridge) and pulled down all the old pots and pans that were piled up and on top of all of the cabinets.  Not a good look.  I found some nice new pots and pans in another closet and with the help of @target pots and pan organizers they are all neat and tide and easily accessible now.  I love their pot top storage racks.  Saves so much space.

The kitchen is all ready for the new installation now.  I think Joseph is happy with the outcome and I’m ready for the next project here on Cape Cod tomorrow, which is a far cry from a kitchen redo.   Stay tuned!